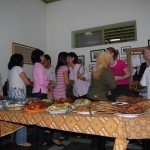 Once in every month, the big family of Wisma Bahasa always has a feast. It is a right moment to make students and staff of Wisma Bahasa get closer to one another as well as the opportunity to celebrate their birthdays. This month, the feast was held on Wednesday, March 18th. Presents were given to those who have birthdays in February, among others, Charlotte Peeters, Anita Ziller, Aan, Wanto, Dewi, Heri, and other ex-students. Well-wishes and prayers for happiness, success, and long life were also said to them.

Birthday is always be a special day for any of us. On that day, well wishes and prayers are said by relatives and friends, eventhough sometimes we have to deal with feeling of growing older. Birthday parties has been a tradition for years, even since the time when people had not invented a calendar yet. Long time ago, most of people did not know exactly the time they were born, since they knew time by noticing signs of nature such as moon and seasons. As time went by, calendar was created. Calendar was used to help people remember their important moments, such as birthday.

There were many symbols associated with birthdays which have been celebrated for hundreds of years. The Greek used a round shaped cake as an offering to the temple of Artemis, Goddess of the Moon. On that round shaped cake, stood some candles as decorations which made the cake look like a moon. Probably, this is one of the reasons why birthday cake usually served with candles on it. Some people believe that the smoke of the blown out candles will bring their wishes to heaven. That is why people will blow out the candles right after make wishes.

Meanwhile, in China, there is a different way in celebrating birthday. When somebody is having a birthday, friends and relatives will serve red eggs and noodles, instead of cakes. Why these foods? Long time ago,eggs were considered to be special food, after meat. Only some people in China were able to eat eggs, since eggs were quite expensive. Therefore, only on special occasions, people will have eggs as a meal. The red colour, was meant to make a different appearance, as well as a symbol of happiness and wealth. Whereas, noodles symbolize a long life. So, if we serve noodles to those who’are having birthdays, it means that we say a prayer for them to live a long life.

However, Chinese does not celebrate birthday every year. There are certain times which are considered to be important moments, based on the 12 Chinese zodiac- shios and 5 elements in Chinese calendar. For example, when a person is having 60th birthday, the date will return to the same shio and element as the day one was born. Therefore, one is considered fufilled one cycle of one’s life. Next is 80th birthday. The age of 80 is considered as long life. People who live until the age of 80 are called the lucky or hoki, and are believed that one have achieved wisdom in Chinese language. Therefore, there is an unwritten rule which forbids anyone to argue with 80 years old person. Another level of life that is important for Chinese is when a person reaches 100 years old, though it is now quite rare. People who reach the age of 100, are believed that they have already taken halfway to be god. Then relatives and friends will say prayers for those people who will become a god someday.

In Javanese culture, tumpeng is usually served in one’s birthday celebration. Tumpeng is cone shaped rice, and surrounded by various vegetables as decorations. People said that the shape of tumpeng related to Javanese topography, which is mountain surrounded by fertile land. The cone shape represents hopes and prayers for our lives to become closer to God. Therefore, tumpeng in birthday celebration symbolizes wishes and prayers so that the birthday person will have a prosperous life and closer to God.

In any places of this world, birthday is always be a special thing for any of us. Eventhough there is no party, there are always wishes and hopes. And the most important thing, there is always a better tomorrow. Happy birthday!